Link openen
HomeFranchise in the Netherlands

Franchise in the Netherlands

Franchise in the Netherlands 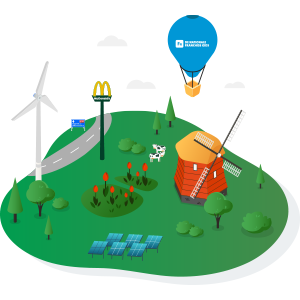 The Netherlands is a prosperous country with an open economy that relies heavily on foreign trade, particularly with Germany. The economy is characterized by stable relations, moderate inflation, a restrained financial policy and by its important role as a European transport artery. Overall, the Netherlands ranks among the 20 largest economies in the world, after such superpowers as the United States, China, Germany, Japan and the United Kingdom. The Netherlands is visited by 11 million foreign tourists annually. Dutch cities count as major tourist destinations. With 5.1 million tourists, Amsterdam is the fifth most visited tourist destination in Europe and the sixth largest convention city in the world. The Dutch population is relatively highly educated, 91% of residents speak English.

Expand your franchise to The Netherlands?

Do you want to know how to enter this mature market and expand your franchise? The National Franchise Guide supports foreign franchise formulas in setting up the formula in the Netherlands. We facilitate a platform where franchisors, franchisees and qualified suppliers can connect with each other. The platform consists of www.denationalefranchisegids.nl (75,000 visitors per month), the weekly newsletter (23,500 subscribers), De Nationale Franchise Krant (10,000 subscribers) and is of course also accessible via our social media. Each medium has the highest reach in the market, both in franchise and retail.

We also organise the Franchise exhibition Onderneem ’t! and The National Franchise Congress. Both in terms of visitors and clients, De Nationale Franchise Gids is by far market leader. We process approximately 675 candidates per month.